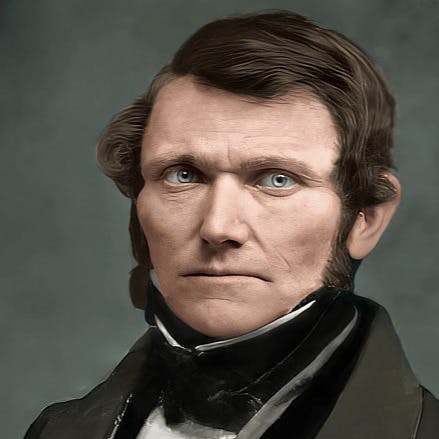 Our purpose in making Wilford Woodruff’s faithful records universally accessible is to inspire all people, especially the rising generation, to study and increase their faith in Jesus Christ, understand and honor sacred temple covenants, and thereby receive the blessings of exaltation with their families.

Wilford Woodruff and the Camp of Israel Revelations

"After much tribulation . . . cometh the blessing"

As 1834 dawned, the Latter-day Saints in Missouri were “exiles in a land of liberty.” A mob had driven them from the land they legally owned and inhabited—land the Lord had consecrated.

Joseph counseled with his brethren, resolved that “he was going to Missouri, to assist in redeeming it,” and asked for volunteers to go with him. Sometime in this sequence of events, the Lord revealed Doctrine and Covenants section 103 to Joseph.

Section 103 says Zion will be reclaimed “by power” (D&C 103:15). The Lord reminds the Saints of his recent promise to raise up a Moses to lead the modern Israelites (D&C 101). He calls on Joseph to gather an army of Israel. Things could get violent, and the Lord promises to go with them, but he makes no guarantees that they’ll all come home. He exhorts them, “Let no man be afraid to lay down his life for my sake” (D&C 103:20, 27).

The Lord called eight recruiters, including Joseph, to gather five hundred men to march to Zion. The Lord knew that “men do not always do my will,” and that relatively few would respond to the call. But he forbade them from marching if they couldn’t find at least a hundred men who were willing to consecrate their lives to Zion. He left the outcome in their hands: “All victory and glory is brought to pass unto you through your diligence, faithfulness, and prayers of faith” (D&C 103:36).

With the Lord’s revelation in hand, Joseph sent the recruiters it named in every direction to gather the Camp of Israel. Parley Pratt was one of them. In Richland, New York he met a twenty-seven-year-old who had been converted to the restored gospel three months earlier, a miller of ordinary stature but exceptional resilience. He was a hard worker who was devoted to the cause of Zion. His name was Wilford Woodruff.

On September 1st, the Wilford Woodruff Papers Foundation released 832 additional pages of documents on its open-access website. The release is a part of the more than 60,000 pages of Wilford Woodruff's catalogued collection to be transcribed and made available to the public by the end of the decade.

The most recent posting contains 680 pages of Wilford's journals bringing the available record to the year 1853 and the groundbreaking for the Salt Lake Temple.

It also contains 124 pages of autobiographical notes that Wilford recorded. These were the basis for his autobiographies published in different formats in the Deseret News, the Millennial Star, and Leaves From My Journal between 1857 and 1897.

​Seven letters from Wilford's mission to the British Isles in 1840 and 1841 highlight the incredible sacrifices the apostles made to share the Gospel. But, through the persecution they suffered, Wilford wrote to encourage them: "Brethren let our souls rejoice, & our hearts be made glad, that we are permitted to bear some humble part in the sacrafices, sufferings, & reproach of Christ . . . & of gathering together the honest in heart & the meek of the Earth that they with us may stand together in Holy places."

In April 1834, Wilford Woodruff answered the call to move to Kirtland, Ohio and join the Saints who formed Zion’s Camp (see previous article). After their difficult march to Missouri, Wilford served a 22-month mission to Arkansas, Tennessee, and Kentucky. He was ordained an Elder in 1835 and a Seventy in 1836.

He returned to Kirtland in November 1836 and on April 15, 1837, Wilford received his patriarchal blessing from Joseph Smith, Sr. He was 30 years old. In part, the blessing admonished him to share the Restored gospel with his father’s household. Within a month of the blessing, Wilford was on his way to Connecticut to share the gospel with his family. The following year, he not only baptized family members but helped organize a branch of the Church in the Fox Islands off the coast of Maine. It was there he received word of his call to the Quorum of the Twelve Apostles (see D&C 118:6). He was ordained an apostle on April 26, 1839, at the temple site in Far West, Missouri.

Wilford provided the pattern of patriarchs in his journal:

"Abraham, Isaac and Jacob were Patriarchs, and blessed their posterity. All that Jacob said and sealed upon the heads of his twelve sons has been fulfilled to the very letter, as far as time has permitted. We also have Patriarchs in our day. Father Joseph Smith, the father of the Prophet Joseph Smith, was the first Patriarch of the Church of Jesus Christ of Latter-day Saints. He gave a great many blessings unto the Saints, which are recorded, and many of them have seen their fulfillment."

Wilford also recorded his impressions upon receiving his own blessing:

"When he put his hands on the head of a person to bless him, it seemed as though the heavens were opened, and he could reveal the whole life of that person.

"Many marvelous things which he sealed upon my head, for which I could then see no earthly chance of fulfillment, have already been fulfilled to the very letter.

One or two instances I will name. He said I should have access to the treasures hid in the ground to assist me in getting myself and others to Zion.

When in Cambridgeport gathering up the Saints, in 1850 Alexander Badlam went to California on business, and the Saints who were digging gold filled a little sack with gold dust and sent it to me to assist me on my mission.

By the sale of this treasure from California I was enabled to emigrate myself, family and a number of others to Zion in the mountains.

"He also said I should have power to bring my father and his family into the Church. This was fulfilled when I visited them during my mission to the Fox Islands, as previously related.

"My father gathered to Salt Lake City with the Saints, and he died there, aged 83 years.

"The Patriarch also said I should be wrapt in the visions of heaven, and an angel of God should teach me many things. This was literally fulfilled.

"Again, he told me I should be delivered from my enemies (who would seek my destruction) by the mighty power of God and the administrations of angels. This was marvelously fulfilled while in the city of London in 1840. Brothers Heber C. Kimball, Geo. A. Smith and I went to London together in the winter of 1840, being the first Elders who had attempted to established the gospel in that great and mighty city.

"As soon as we commenced we found the devil was manifest; the evil spirits gathered for our destruction, and at times they had great power.

"They would destroy all the Saints if they were not restrained by the power of God.

"Brother Smith and myself were together, and had retired to our rest, each occupying a cot, and but three feet apart.

"We had only just lain down, when it seemed as if a legion of devils made war upon us, to destroy us, and we were struggling for our lives in the midst of this warfare of evil spirits until we were nearly choked to death.

"I began to pray the best that I could in the midst of this struggle and asked the Father in the name of Jesus Christ to spare our lives.

"While thus praying three personages entered the room, clothed in white and encircled with light.

"They walked to our bedside, laid hands upon our heads and we were instantly delivered; and from that time forth we were no more troubled with evil spirits while in the city of London.

"As soon as they administered unto us they withdrew from the room, the lights withdrew with them and darkness returned.

"Many other sayings of the Patriarch Joseph Smith in my blessing have been fulfilled in my experience, but I have said sufficient on this subject. All the blessings that are sealed upon our heads will be fulfilled, and many more, if we are faithful and live for them.

"In closing my testimony I wish to say that I do not think that the Lord ever sends an angel to the earth to visit the children of men, unless it is necessary to introduce a dispensation of the gospel, or deliver a message, or perform a work that cannot be done otherwise."